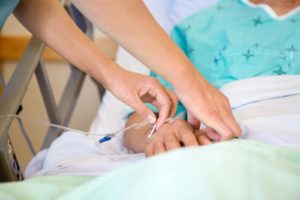 “Trisha” was 24 years-old. She was 39 weeks pregnant and eagerly awaiting the arrival of her 4th child. Throughout the last several weeks of her pregnancy she had been experiencing head aches, chest pain, and swelling.

She told her doctor about these symptoms. Unfortunately, Trisha’s doctor was not a board certified obstetrician. He was simply a family practitioner with limited training and education with regard to complications that can arise in pregnancies. Rather than refer Trisha to a competent obstetrician, he told her the symptoms were nothing to worry about. In reality, Trisha was suffering from a condition known as preeclampsia, or pregnancy induced hypertension.

The day after she last told her doctor about how she was feeling, Trisha became terribly ill and was taken to the emergency room. Her blood pressure was extremely high. Although Trisha’s unborn baby was not in any distress, the doctors decided to perform an emergency c-section before stabilizing Trisha’s blood pressure. This was a tragic mistake.

Within minutes of delivering her baby, Trisha’s suffered a massive stroke from the dangerously elevated blood pressure. After several days on life support Trisha was declared brain dead and support was withdrawn.

We retained obstetrical experts from around the country and reached a settlement with the defendants that will help take care of Trisha’s four young children for many years to come.

If you have been injured because a doctor was practicing outside of his or her expertise please call G. Eric Nielson & Associates, we can help.