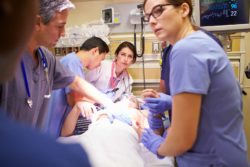 38-year old “James” was admitted to the hospital for a very simple surgical procedure. Upon admission, the hospital nurses took a detailed history from James and his wife. James indicated on the history form that he had sleep apnea, a respiratory disease that sometimes caused him to stop breathing at night. James’ wife also told the nurses and doctors about this condition before the surgery.

The next morning James went into surgery. The procedure lasted less than half an hour. James was then sent back to his room. He was given multiple doses of pain medications that the nurses knew would suppress his respiratory abilities. Throughout the next twelve hours the nurses continued to notice that James was having a hard time breathing and was requiring more oxygen. Still, they did not tell a doctor what was going on and they failed to put James on a monitor that would sound an alarm if he quit breathing.

At two o’clock in the morning a nurse walked into James’ room and realized that his face was blue and he was not breathing. James left behind a wife and 6 year-old triplets.